Where have all the film photo bloggers gone? A solution to ‘scanning’ film using a digital camera? 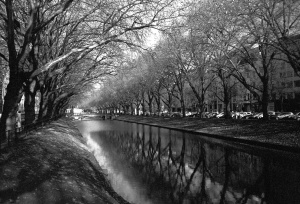 The pocketable CX-2 can produce good shots. This is Konigsalle in Dusseldorf

A single blogger who I followed from my other, non-photographic, blog (grumpytyke) has persuaded me to open this other blog of mine and think about beginning to post on it again. It was a sad experience; many (most) of the blogs I followed from here had not been updated for more than a year, of those the majority had not been updated for more than two years. Does this mean those bloggers have deserted the ‘photography on film’ community or, like me, health or something like equipment failure has kept them away?

So, I have ‘unfollowed’ bloggers who have not posted for more than two years, still following those who have posted in the last two years, in the hope they will join the few still posting, though that’s probably optimistic.

Briefly, my dropping out on this blog was due to serious problems with health and, at the crucial time, my old scanner packed up. So  most film photography, including housing an enlarger in a wardrobe, half done, has been on hold. I almost sold the majority of my film cameras but couldn’t bring myself to do it.

It’s a possible solution to the scanning which has made me think about blogging here again. It was my ‘Minolta ‘Dimage Scan Dual II‘ which packed up; my Epson Perfection 4990 was always too much of a hassle for 35mm.

So what scanning solution has brought me back here? The possibility of the launch of a product which would make easy ‘scanning’ using a digital camera.

I’ve tried it using a cobbled together set-up but it proved to be even more hassle than the Epson. Now someone has come up with what looks like a great solution – ‘pixl-latr‘. Problem is that it’s not available yet; money to put it into production is being sought, through crowdfunding (though so far I haven’t been able to find a scheduled production date). However, what it has shown is that the film fraternity is far from dead; over 500 backers have jumped on the crowdfunding. You’ll find the details here:

Cameras for a trip to Romania

Whatever I decide about posting again, I will take a least one, possibly more, film cameras on my planned drive to, around and back from Romania this summer, as well as a digital. Last year I took my Olympus OM2 but hardly used it. I’ll probably take the same this year with one or two OM lenses (with adapter to use on the mirrorless digital), but supplemented by one or more ‘pocketable’ ones – maybe Olympus XA and/or XA4, or maybe the more pocketable (lighter) Cosina CX-2. The Minox 35 GT would be my choice had it not become unreliable. For quick ‘snapshots’ for the blog I’ll use the iPad.

Developing will have to wait till I get back home in September. That has never been a problem for my preferred black and white. For C41 I’m lucky enough to have an excellent, reasonably priced processing house close by. For now rarely used diapositive film (I still have a few rolls of my all-time favourite – Astia, mostly 120) I use the Fuji service.

Another decision I’ve made is to document my travels on my other blog with as regular a posting as I can manage, when I can find convenient WiFi. Hence the digital camera. In past years I’ve used Facebook in a private group for this travelog but I so dislike Facebook I’ve almost closed down my use of it.

8 thoughts on “Where have all the film photo bloggers gone? A solution to ‘scanning’ film using a digital camera?”

Comments on the pictures, or the texts, are really welcome and helpful Cancel reply

This site uses Akismet to reduce spam. Learn how your comment data is processed.